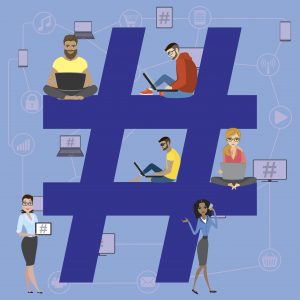 The Science of Hashtags: Get the Scoop

The creation of hashtags had nothing to do with marketing, advertising, or even social media.  The originator is Chris Messina, a former Google employee who suggested using # to organize and track projects. A tweet dated August 23, 2007 notes Chris’s request to use hashtags — and since then, we’ve come a long way, baby. While your grandmother may not be using them yet, it’s probably a short while off.

Today this tool is helping us keep track of our own content on social media, as well as discover new content. When used properly, a hashtag can be an excellent way to make your content easier to find, help extend your organic reach, and maximize your exposure to both existing and potential new audience members all at the same time. The science behind hashtags is fairly straightforward, you just need to keep a few key things in mind.

At its core, a hashtag is a word (or short phrase) used on social media that is immediately proceeded by the # sign. It’s a technique commonly used to identify messages on a specific topic so that people can participate in conversations that they’re interested in.

Hashtags are naturally clickable, which means people can instantly use a hashtag to identify similar content that they may find helpful or relevant. For example, if you use the hashtag #SuperBowl on Twitter in a post during this year’s big game, anyone who is interested in that topic can click on it and find relevant discussions. If enough people use the same hashtag it begins to ‘trend,’ which means that it is visible to essentially all users of a particular platform at the same time.

If you really want to be successful with hashtags on social networking sites like Facebook, Twitter, and Instagram, you need to get a better understanding of their unique use on each of these platforms. Instagram, for example, allows users to include up to 30 different hashtags per post. Facebook imposes no such limitation, and Twitter allows you to use as many hashtags as you can fit into your 280-character messages.

For the best results, use hashtags from ALL these categories in the posts you create to effectively target different segments of your audience in a more organic way. Using the popular hashtags will help increase exposure, while breaking things down into moderately popular hashtags will narrow your focus and help find people who are already interested in products and services like yours. Branded hashtags help reinforce your brand and its image and niche-specific hashtags let you take advantage of conversations that are relevant to your industry that are already happening.

With the right combination of hashtags from these categories, along with the consistency that comes with using them for every post on Facebook, Instagram, and Twitter, your social media marketing efforts will be stronger than ever.