5 Gamification Campaigns that Tipped the Scales

Case Studies for Gamification that Will Make You a Believer 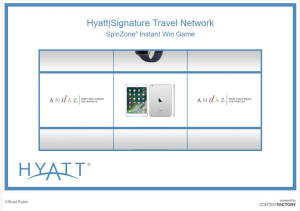 Gamification is more than just a modern-day trend or passing fad — it may very well be one of the most important opportunities that you have access to as a marketer today. In fact, there are five core gamification campaigns from recent memory that absolutely tilted the scales in their own special ways. These are campaigns that anyone can learn from, following their strategies and efforts to create impressive results for you and your brands as well.

In the run up to the 2015 Signature Travel Network trade show, Hyatt partnered with Contest Factory to launch an Instant Win Game that would be promoted during the show’s floor hours. In exchange for their email address, along with sharing their visit on social media, attendees could participate in the game to win prizes that ranged from Hyatt Resort certificates to iPads, GoPros, and beyond.

Those efforts were successful almost instantly — Hyatt experienced so much activity at its booth that they had to open another line and had two full lines of people that stretched across the venue, waiting to play Hyatt’s unique version of the SpinZone Trade Show Edition Instant Win Game.

One gamification campaign was so popular that it even won an award: HBO used this technique to create an unprecedented level of excitement ahead of the season five premiere of their hit show Game of Thrones.

It used a unique hashtag — #CatchDrogon — to essentially ‘catch’ one of the dragons from the show by way of fan Twitter pages. HBO posted certain types of branded promotional content as ‘bait’, which would entice the virtual dragon to come out of hiding. Fans then needed to quickly retweet that message before the dragon flew away. Fans could also use the Giphy Bait Shop to create their own bait to help snare the dragon.

The season five premiere of Game of Thrones was the most popular yet and it’s certain that campaigns like this were a part of that success.

Fast food giant Taco Bell also recently used gamification to create a huge new level of success, offering a digital board game as an opportunity to hook new customers. Once users finished the game, they were immediately prompted to create a new order online — which itself helps to illustrate how important it is to pair gamification with the right call to action.

In the United Kingdom, Papa John’s Pizza ran a similar campaign that began simply with having subscribers choose their favorite soccer teams. Whenever their teams scored at least two goals, users would get a 50% off discount code for their next order. Not only is this a splendid example of how to tie gamification in with your user’s own interests (those that go beyond what your brand represents), but it’s also a perfect illustration of just how effective passive gamification can really be.

Yes, it’s true that maybe this isn’t the best example to use in terms of illustrating how gamification can increase your chances of success in the most literal sense — but it’s still impressive enough that it warrants a mention. During her 2016 presidential campaign, Hillary Clinton released an app that was essentially a series of games to increase engagement with her campaign.

Users began using the app with an empty virtual office that they could furnish by completing tasks and earning stars. By volunteering, sharing news, information, and more, they got to design their own virtual campaign headquarters. People who earned enough stars could also redeem them for physical prizes — like memorabilia signed by Clinton herself.

All these examples go a long way towards proving that gamification can be used to profound effect in nearly every environment — from traditional marketing to campaigning for presidential elections and everything in between. At this point, it’s clear that gamification is more than just a $91 billion industry: it’s an opportunity you